:: Remembering the surgery that taught me so much ::

“The worst part of holding the memories is not the pain. It’s the loneliness of it. Memories need to be shared.” -Lois Lowry, The Giver

Chris, Promise, and I just returned from a ten day vacation in southern CA. The re-connections and memories that were made while we were there were needed. It was a sweet ten days; a mixture of laughing, morning dance parties in our hotel room, local attractions, sailing, time with extended family, warmth, and new friendships. The sun did far more than heal my Wisconsin-induced Vitamin D deficiency.

During our time with Chris’ Uncle Brian and Aunt Janelle, I had the privilege of meeting Janelle’s “fab five”. A group of ladies joined by their love for Jesus and the way he’s working out his kingdom in their lives “beyond, beyond, and beyond” what they can imagine (as they like to tell me). Their names were familiar to me. Some I had met, some I had painted for, some I had rcvd emails from with encouragement that they were praying for me. I was thrilled to meet them all face-to-face, sit outside with my iced latte, and share more about how God is bringing hope into my suffering.

They were patient and gracious as I stumbled over memories from all that my body and heart have been through. They were engaged and shared pieces of their own suffering and redemption. Janelle took on the arduous task of entertaining Promise, so that I could talk uninterrupted, but would periodically interject her own memories, specifically from my last spine surgery.

Her memories were like little gifts that she was unwrapping and handing to me. Things that I could not have remembered because of narcotics and pain.

There’s something so healing about sharing memories with others. These memories may seem repetitive to the listeners who don’t understand their significance, but memories are important.

By the time I post this, it won’t be March 22nd anymore, but March 22nd is a day that floods me with memories. In addition to being the birthday of two of my closest friends, it marks 3 years since I had my 7th spine surgery… the surgery that was physically and emotionally brutal for me.

When I share my story with women, I like to say that it’s the day that they cut me in half. Dramatic? Maybe. But not far from the truth. They shortened me by an inch, removed my ribs, cut some of my most major nerves, put PIC lines in me, drains in me, screws in me, rods in me, and then three days later, asked me to try to stand up. 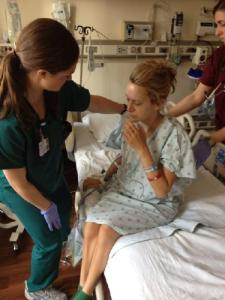 It was pain more severe than I’ve ever thought possible. Pain that drove me to my knees in tears of thanksgiving a month later as we remembered Jesus’ brutal beating and crucifixion on Good Friday and then resurrection 3 days later on Easter Sunday. How did he bare all of that pain? His spine was ripped into with shards of metal, glass, and bone. His human body was ravaged with pain and he did it all (without narcotics) for me.

It was the surgery that first broke my “mama’s heart” when Promise was too scared to even come near me. She was three. I was broken… mended back together by a back brace and supported by a wheelchair. 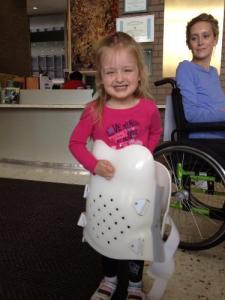 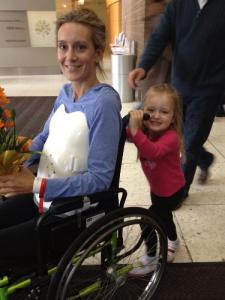 It was the surgery where the anesthesiologist gave me a “free eyebrow wax” while removing the tape that held my eyes shut during the 9 hour procedure.

It’s the surgery that showed me how much Chris loves me. It’s the surgery that taught me that I can’t shelter Promise from experiencing pain (and that that’s good!). It’s the day I lost the majority of feeling in my back (it now feels like a slab of rubber) but gained new motion in my left foot. It was the day that my Neurosurgeon breathed a sigh of relief that my spine had fused well, despite this only being the 8th surgery of this type done in the country. It’s the surgery that forced Chris and I to make a decision and believe with our whole hearts that God loves me more than I know and would allow the results that He knew were best. It’s the surgery that still, to this day, causes me much pain, but I am walking (and have found Andy Kerk at Body Mechanics to help with that:))

It’s the surgery that propelled me into facing my depression and seeking help. It taught me that God is fully capable of physical healing, but sometimes chooses not to (and that’s OK). It’s the surgery that confirmed that (at least for now) Promise would be our only child.

It’s the surgery that 3 years to this day, I don’t regret (yet have questioned) and am wildly thankful for (as backwards as that may seem).

Thank you for letting me share my memories with you.

5 responses to “:: Remembering the surgery that taught me so much ::”